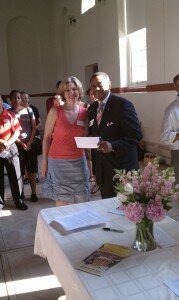 The Capitol Hill Community Foundation draws on the generosity and idealism of the Capitol Hill neighborhood to help build a stronger and more caring community—a place where families can flourish and where every resident can share in a better future.  Learn more about their mission and work!

Keith is a native Washingtonian, raised in Ward 7, who attended DC public schools and graduated from H.D. Woodson Senior High School right down the road from the CCC office.

He continued his education at Morehouse College where he began his career in public service, serving as president of the student government association while earning his bachelors degree, and later returned to D.C. to obtain a law degree from Howard University.  More recently, Keith received a nonprofit management certificate from American University.

Keith has 23 years of experience working in DC for local government, advocacy, and nonprofit organizations where he has held numerous senior positions and is known for his ability as a skilled leader.  Throughout his many years of public service, he has built an extensive network throughout our city and a diverse set of skills from communications to financial management to strategic planning that will serve CCC well in our next phase of growth and development.

We are thrilled to welcome Keith Andrew Perry as CCC’s next leader – and are confident that he will inspire local youth, build new networks of support, and propel CCC to new heights as we look to build and expand on CCC’s valuable work in the DC community.

During this time of transition, we want to thank you – our many supporters – for your ongoing commitment to CCC and our work with local youth.  We look forward to introducing you to Keith in person shortly!

CCC Accepted to the Catalogue for Philanthropy

CCC is thrilled to have been selected from over 270 local nonprofits to be included in the 11-12 Catalogue for Philanthropy.  The Catalogue generates visibility and resources for the best community-based nonprofits, making giving a more meaningful experience for donors.  Please request a catalogue from their website to see CCC’s feature in it!